Every great story has an origin. For the Reich College of Education’s (RCOE) Anderson Reading Clinic’s Literacy-Casts, it began when Dr. Devery Ward, an associate professor in the RCOE’s Department of Reading Education and Special Education (RESE) and director of the Anderson Reading Clinic, had the idea to create an online space to continue engaging students in literacy instruction.

“When it became apparent that Appalachian was moving to virtual instruction, I became worried that our clinic children would not receive tutoring services and our graduate students would not be able to participate in teaching experiences,” said Ward. “I reached out to my colleagues, Beth Frye, Jason DeHart, and Beth Buchholz, and asked if they'd be up for creating something new, and they said yes.”

Since March 18, 2020, Ward, Frye, DeHart, and Buchholz have hosted 63 Literacy-Casts for students in kindergarten through eighth grade from the High Country area, Academy at Middle Fork in Walkertown, North Carolina, and as far away as Utah and California. 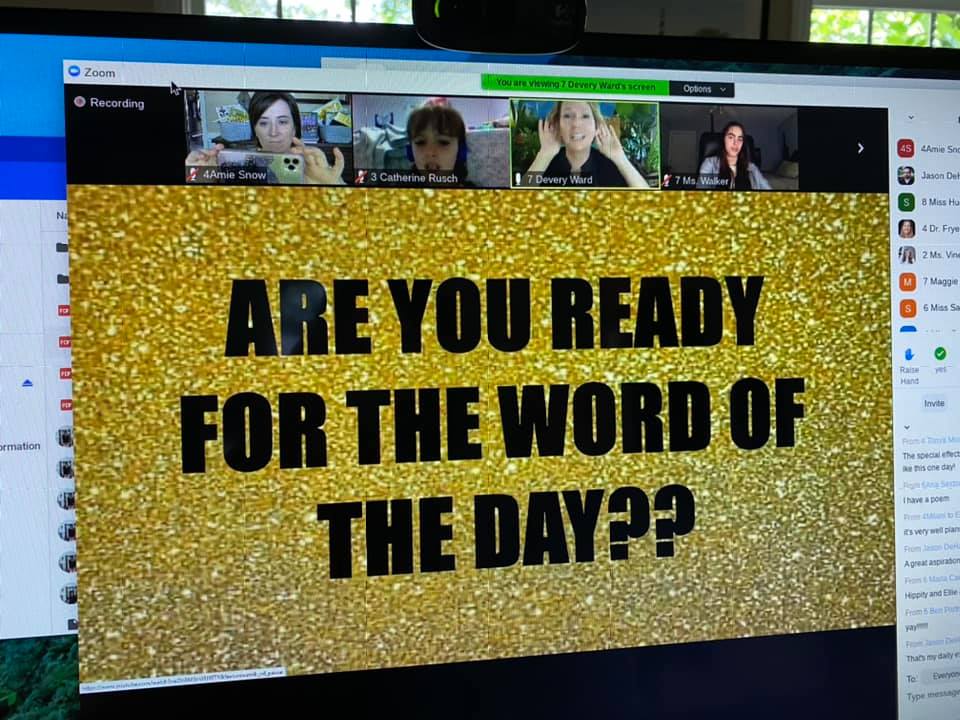 "Are you ready for the word of the day?" Photo submitted.

When it was her turn to lead, Ward would begin the Literacy-Casts by saying "Hello Friends."

“In my opinion, those words transformed our 60-90 separate and spread-out devices into one magical literacy community,” she added.

“We provided opportunities for children to read, write, draw, and create, everything from making ‘How-To’ books and origami to exploring the potentialities of poetry: reading poems and creating collaborative poems to drawing and making comics,” noted Frye.

Participants of the Literacy-Casts were invited to create and publish their work through the clinic blog, the virtual Book Creator library, and the clinic’s Poetry Padlet.

“I think the Literacy-Casts allowed us to create a connected community and that felt really good,” added Ward. “It also allowed children to engage with literacy in whatever way they were able. We supported, encouraged, and praised one another. As a result, we were all able to grow.” 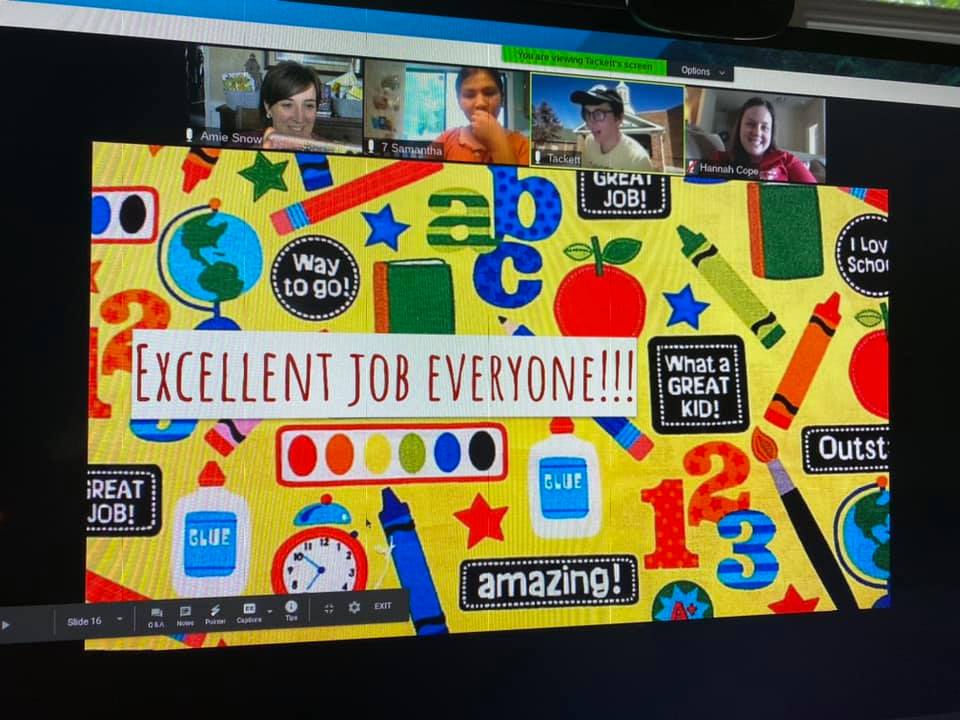 The support was evident in the chatbox, which were filled with words of encouragement, not only from Ward, Frye, DeHart, and Buchholz, but also from the Appalachian undergraduate and graduate students and the children themselves. After each story was read, everyone was praised with “poet snaps, author claps, and comic zaps.”

The Literacy-Casts not only benefited K-8 students.

“This was a unique environment for the undergraduate and graduate students to see their professors interacting with young children from a variety of places,” said DeHart. “It was a real-life, hands-on experience, and our students had the chance to see us practice and then try it out. It's hard to do that in a standard course.” 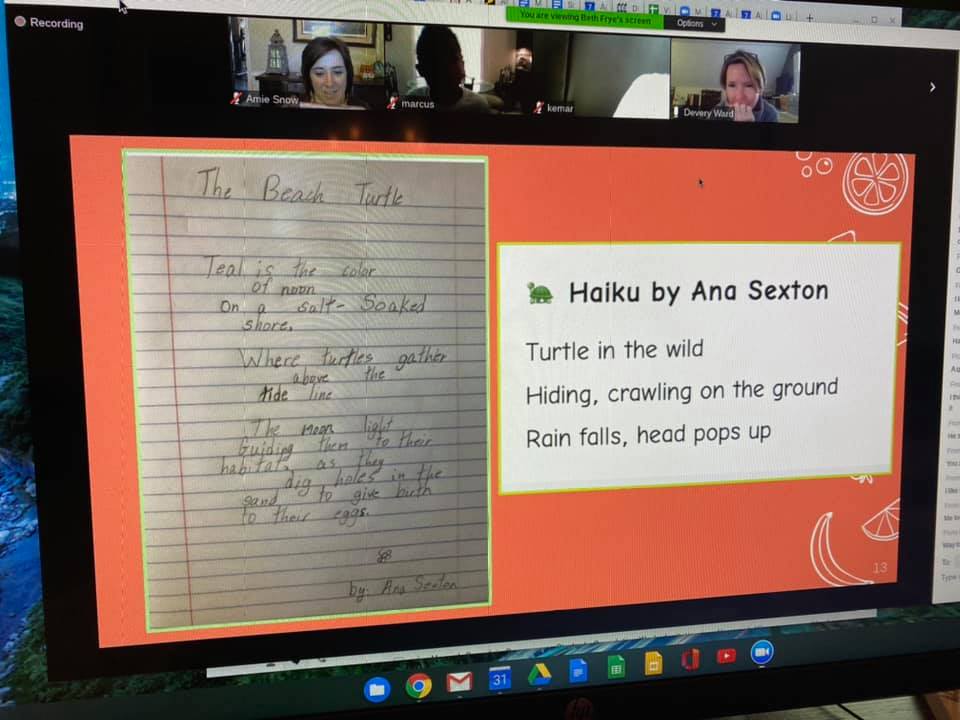 A Haiku by one of the students. Photo submitted.

When asked about their favorite moments from the Literacy-Casts, everyone said there were so many to choose from!

Frye noted that in “EVERY session, we highlighted the published work from children, teachers, and graduate students.”

“I loved having the chance to try out comic book reading and making with young children again,” mentioned DeHart.

“One that stands out is the day that some of the SDAP scholars, who have been working in the Anderson Reading Clinic, were guest hosts,” remembered Ward.

“In particular, Elizabeth Droessler and tutor Lauren Fidler, joined to share Elizabeth's book about her work on her mother's farm,” she added. “She joined the cast while holding a baby goat in her lap.”

Taylor Ruppe and her tutor Lauren Brackett also joined to share both Taylor's blog about living with cerebral palsy and her book about the assistive technology Co:Writer.

“This was such a powerful moment for all of us,” noted Ward.

Allen Thomas also joined to share some of the characters that he has been creating for a movie that he is developing in which all of the main characters have disabilities, which then become their super-powers.

“As a community, we valued the representation and inclusion of diverse lived experiences,” said Ward. 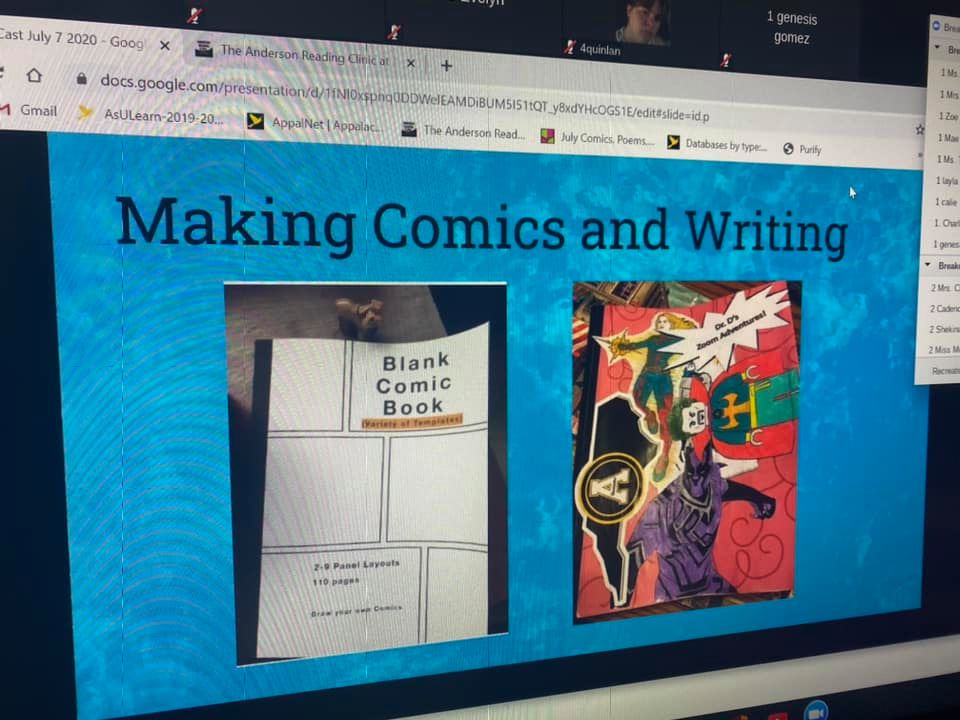 On Fridays the team talked and created comics. “We called them Fun Fridays,” said Ward. Teachers have often been seen as superheroes, and even more so in the Literacy-Casts.

For Ward, her favorite superhero is Princess Emanata, a character from an early literacy-cast. “On one of our first Fun Fridays, Jason was pointing out some of the features that you find in comic illustrations, and together, Beth and Jason introduced the term ‘emanata’ .”

“We then talked about how ‘emanata’ is related to the word ‘emanate,” Ward continued. “That was one of the first vocabulary words we directly taught and started using. Some might consider that word too advanced for our audience, but with the right amount of modeling, practice, and authentic engagement, it wasn't.”

From there Frye became Princess Emanata.

“I was Queen Origami because every Monday and Wednesday we created origami by using ‘how to’ texts that we created and found in our virtual library,” added Ward.

For DeHart, his colleagues were his superheroes. “They are amazing teachers and I love learning with them and from them. It's a rare combination to find scholars who conduct research, work with college students, and teach young children so well.”

For Frye, her favorite superheroes were Queen Origami (Ward) and Crochet Queen (Halie Hamilton, a graduate student who just graduated). “Both of these superheroes harnessed their talent for making/creating, sharing, and teaching others about their craft...that is what our Literacy-Casts are all about!” 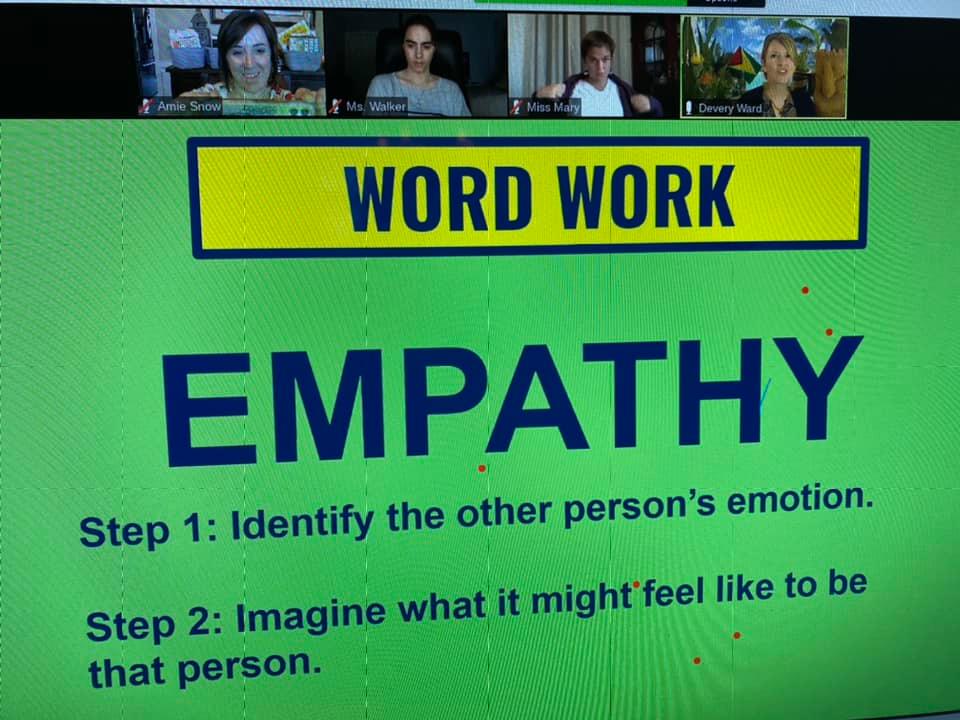 From last spring and through the summer, Ward, Frye, DeHart, and Buchholz have increased their super teaching powers through the online platform.

“Collaboration is ESSENTIAL,” exclaimed Frye. “I learned so much from working alongside my colleagues, teachers, graduate students, and the children.”

“I was reminded that teaching is emotional and powerful work,” noted DeHart. “I think the same holds true for online, even though some of the challenges are different. I feel like this experience gives me permission to be that much more passionate about what we do.”

For Ward, “Whether face-to-face or online, teaching is about relationships and community.”

The magic word to gain superpowers is collaboration.

As part of the collaborative nature of the Literacy-Casts, the Anderson Reading Clinic held a "sharing session"  for teachers and school staff to help those who are preparing to offer virtual literacy instruction. As with all new adventures, there were some challenges.

“We didn't have a model; we just figured it out as we went and we did it through collaboration,” said Ward.

For Frye learning how to manage 80+ participants, many of whom they didn't initially know, was a challenge. “I could not have done this alone -- helping each other figure out how to assist the participants, read the chat, and teach. Again, collaboration and patience are key!”

“Our learning curve in working through the tools in Zoom were part of this challenge, and we overcame this through collaboration and trial and error, which, ironically, is what teachers often find themselves doing in physical classrooms, too,” noted DeHart.

The Literacy-Casts with Ward, Frye, DeHart, and Buchholz will return August 24, 2020, for the fall semester. Students already have a comic challenge - create a comic about EMPATHY! 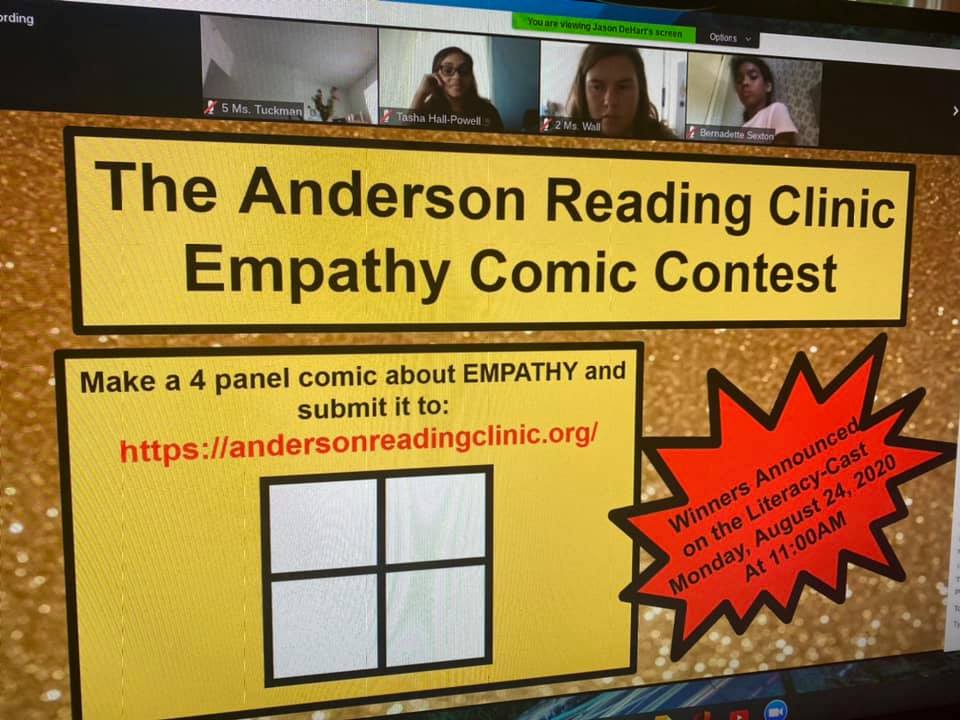 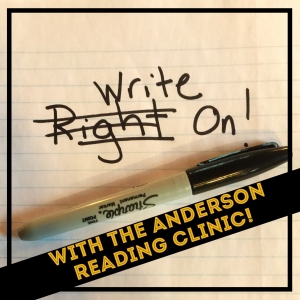 Write On! With the Anderson Reading Clinic 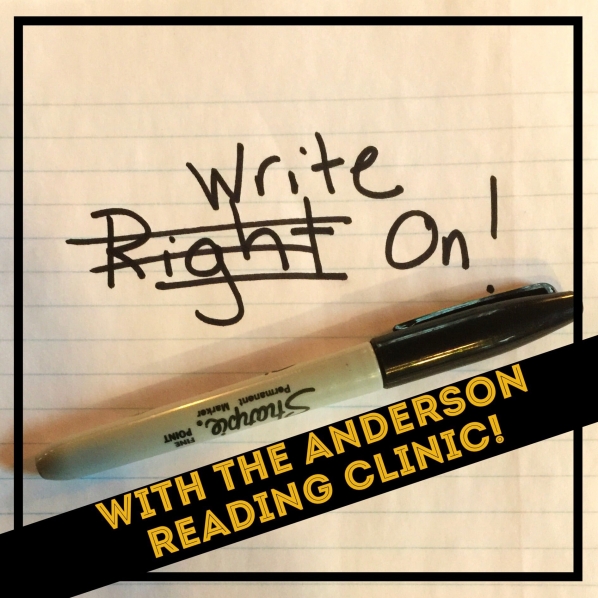